via: John Fitzgerald in Kilkenny, Ireland.

— The ongoing campaign to abolish hare coursing in Ireland is a story of compassion versus cruelty on one level…but it’s more than that. It’s also a story of political corruption and crooked cops…of powerful people using their influence to suppress to a vile form of animal cruelty. All Gods Creatures Deserve a Fighting Chance.

This petition is one way to express one’s abhorrence of hare coursing. Another way, for me, was to set down the story of the campaign and how it impacted on at least one campaigner…myself: 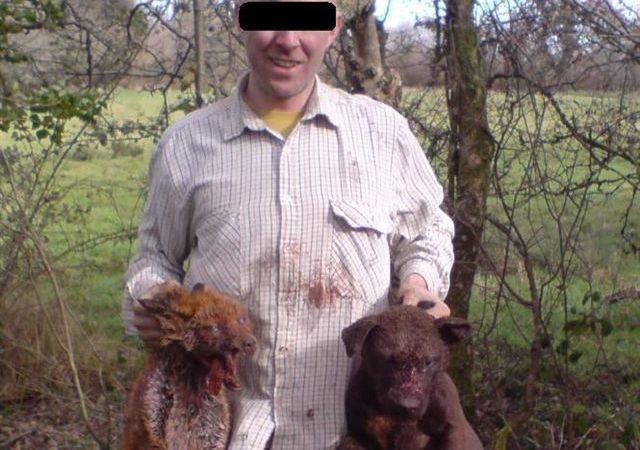 Because these activities make life a living hell on earth for animals in Ireland.

Ireland’s animal welfare rules are supposedly being updated under a new law. Please tell our government to outlaw, as a matter of urgency, a number of extremely cruel practises that make life a living hell on earth for animals in Ireland…

Three of the worst practises are 1) Fox hunting, 2) Hare coursing, and 3) possibly the worst obscenity, the use of half-starved terriers and cross-bred dogs in “unearthing” foxes that seek refuge underground from pursuing hounds and hunt followers.

The Minister for Agriculture has already indicated that although he does not wish to ban foxhunting itself in its entirety, he is repulsed by the “dig-out” practise and is not in favour of it.

This is where you come in, and where you can really help to end this horrendous form of animal cruelty. Please relay to the Minister via this petition the message that Ireland’s image as a nation will not in any way benefit from allowing this appalling practise to continue for one more day.

The picture shows the effects of this “sport”. We are sure you will agree that such treatment of an animal, any animal, is abhorrent in the extreme. It shows a foxhunter proudly displaying a fox his dog has “unearthed” and the dog that is, sadly, also a victim of this depraved activity.

Hare coursing can, and should, also be banned under the Animal Welfare Act, though it is currently exempted from prohibition. This practice, as you may already know, involves setting greyhounds after live hares in wired enclosures and results in thousands of these gentle creatures being horribly mauled or battered every year by the dogs for “sport”. And of course many dogs also are injured or die in the process.

So, we are asking you to sign this petition to ensure that dog and cat murderers, fox hunting, digging out of foxes, and hare coursing are banned once and for all under the Animal Welfare Act. http://www.change.org.

Here is a brief video clip of a dig out:

Life-long hunter Walter Palmer closed his practice today and said he was willing to cooperate with any investigation, as guides he used in the hunt face charges in Zimbabwe.
» Subscribe to NBC News: http://nbcnews.to/SubscribeToNBC
» Watch more NBC video: http://bit.ly/MoreNBCNews

NBC News is a leading source of global news and information. Here you will find clips from NBC Nightly News, Meet The Press, and our original series Debunker, Flashback, Nerdwatch, and Show Me. Subscribe to our channel for news stories, technology, politics, health, entertainment, science, business, and exclusive NBC investigations.

We are currently working on a LIFE EXPECTANCY CALCULATOR to include ELEVATION / LONGITUDE / LATITUDE / POPULATION DENSITY variables and their relationship to life span and quality of life. Other areas of interest for publishing include: Industrial Automation | Environmental Optimization | Space | Forensics | Logistics Favorite quote: "Know what you don't know" (Someone, 2020). Jessica attended the University of San Diego’s lawyer’s assistant program immediately obtaining her undergraduate degree. She worked as a legal assistant while she pursued her master’s in forensic science. After obtaining her MS. degree she continued to work in the legal field for years till she got involved in the pre-planning business. She is working on her PhD in forensic psychology at GCU: Focus: Prison reform and its relationship to economic equality/life expectancy to produce a dissertation topic that focuses on solutions to the problem. Improving educational skills training can elevate quality of life while raising life expectancy. (Klocko, et al., 2015). A qualitative approach, utilizing both quantitative statistics over time and qualitative population sampling, would best represent all angles of this topic (Stimpson & Walker, 2020). References: Klocko, B. A., Marshall, S. M., & Davidson, J. F. (2015). Developing practitioner-scholar doctoral candidates as critical writers. Journal of Higher Education Theory and Practice, 15(4), 21-31. Natt Och Dag, K. (2017). A Scholar-Practitioner Perspective on a Leadership Development Program in Health Care: Integrating Connectivism Theory. Advances in Developing Human Resources, 19(3), 295–313. View more posts